Showing posts from July, 2012
Show all

In Search of Dumpster Babies 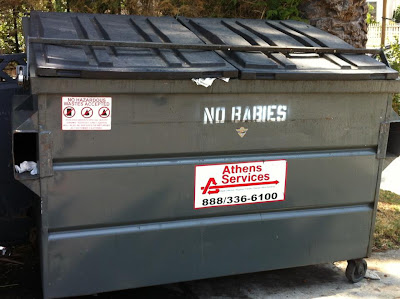 At the insistence of my six-year-old daughter we took a much needed stroll around the neighborhood. And while engaged in a discussion about a magical, fuchsia and lavender-colored, flying horse named Princess Celestia (see earlier entry) , I spotted this. This made me wonder what would prompt someone to stencil this rather bothersome decree on their dumpster. Might there be a grizzly history attached to this dumpster?  Might it simply be a warning because of past grizzly events?  Or might it simply be a random tagging by a  conscientious  Crip? In 2001, about a year before Michael and I started the adoption process, "dumpster babies" were on the rise. Now, all fifty states have  enacted  their own version of the Safe Haven Law, which  allows parents to relinquish a newborn baby to any hospital (sometimes a police station or fire station depending on the state), within 72 hours of the child's birth without any threat of being prosecuted.*  One would think find
9 comments
Read more
More posts