Showing posts from May, 2009
Show all

Candy Has Never Tasted So Tart

- May 31, 2009
I read something that boggled my mind. Candy Spelling on some radio talk show said that her husband, Aaron, producer of such megahits as Dynasty and Melrose Place  probably died of a broken heart because daughter Tori was estranged. I am not a follower of the sudser that is Spelling , however I find this type of public pronouncement unsavory. It certainly does not show her in a pretty pink light.   Not to get all Dr. Phil on you Candy, however if you want to get back into your daughter's good graces, I'm pretty sure this is NOT the way to do it. I have not heard that you are a stupid woman, so the armchair conclusions I draw from your actions are that you want to keep your fifteen minutes going a little bit longer, you want nothing more to do with your daughter or you're hurt and are acting out.  Pathetic. I have a friend who is fighting for her life. Daily she endures a battery of tests. She has chemo once a week and deals with the fallout the rest of the time. She is
8 comments
Read more 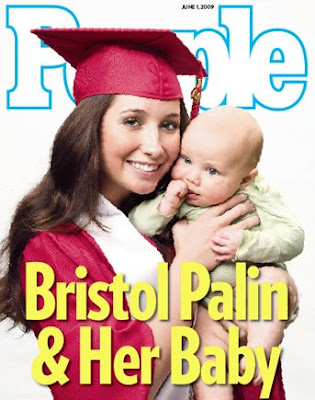 It occurred to me earlier this week that I haven't written a Bad Mommy installment in quite a while. For those of you not in the know, Bad Mommy is where I commemorate various bad mommy moments. They could be my own personal missteps or newsworthy mommies who do jaw-dropping, unthinkable things. So, I'm shopping at Vons, racking my brain for bad mommies. You know, the usual crowd... Britney? Dina Lohan? Octomom? Mom of Octomom? When at the check out lane, this knocks me for a loop... Could there be a more flabbergasting display of mixed messages? Bristol Palin, advocate for abstinence , looking pleased as punch with her cherubic baby boy wearing a (popped her) cherry graduation gown and mortarboard. I was baffled...hit me upside the head...the entire last year was a dream...baffled. Teen pregnancy has never looked so glamorous! Now, I am aware there are a lot of mothers out there who successfully raised their kids in similar circumstances. And I'm not one to slap moral
22 comments
Read more

- May 26, 2009
Let's get something straight . (Perhaps an unfortunate choice of word.) The consolation prize does not work. This is not like getting second place, the a red ribbon. I will not get up and say it was an honor just to be nominated . This was not we'll do better next time or congratulations or be a sport . This was a heart wrenching decision. So, even though I appreciate the well wishers who chimed in, at least your marriage is still legal, my heart is tight in my chest, my brain screaming. Prop 8 was unfortunately upheld by the California Supreme Court, and in a confounding display of decision making, so were the eighteen thousand same sex marriages that were performed between June and November of last year. Upheld. I'm still married. But my brothers and sisters who didn't take advantage of the four month window cannot. I do not feel victorious. People want to tell me about the bright side . But I don't need any one to pacify me right now. My anger will serve me.
12 comments
Read more

- May 26, 2009
Exactly one hour before the California Supreme Court rules on whether to uphold Prop 8, I needed some validation and I think I found it... The National Organization for Marriage...gave me hives just typing it...the group against gay marriage because somehow it will ruin opposite marriage in some sort of hush hush conspiratorial way, has proudly posted the following Stephen Colbert clip on their website. “I’ve always thought Stephen Colbert was a double-agent, pretending to pretend to be a conservative, to pull one over Hollywood. Now I’m sure,” said Maggie Gallagher, President of the National Organization for Marriage. Maggie, sweetheart, I think you missed the biting satire that is the genius of The Colbert Report. The Colbert Report Mon - Thurs 11:30pm / 10:30c The Colbert Coalition's Anti-Gay Marriage Ad colbertnation.com Colbert Report Full Episodes Political Humor Keyboard Cat One more thing, Maggie, darling, Stephen and I were the only guys to be transferred Junior yea
8 comments
Read more

- May 21, 2009
For Fatherhood Friday, a little ditty about fathers and daughters... "Papa!" I was summoned. "Papa!" It was six forty and baby girl was about to make her morning pronouncement. "Papa!" "Coming." I lumbered out of bed wondering what she'd say today. It could be anything from I like bananas to Kitty cat is fuzzy. I remember when she said I want to do ballet and I thought, "Okay, kid, you're two, how the hell do you know about ballet?" The answer to that did not take too much sleuthing. Maxie is an Olivia freak. You know, the precocious piglet with a vivid imagination. Was a book, now a popular TV series on Nick Jr. I think there are only about twelve episodes and they practically run on a loop in our house. I can quote from it verbatim. In one episode, Olivia does ballet, and Maxie wanted to as well. The thing about these pronouncements, I'm one of those doting parents who will try to make it happen. Bananas, simpl
24 comments
Read more

Come On Boys, Drop Your Shorts

- May 20, 2009
I never thought I'd be that person. You know the type. Who would get offended by the words or actions of television characters. What she said is racist. That is blatant sexism. That kind of systemic ageism reflects badly on our society. Come on! Lighten up. It's only TV. And then I watched last week's episode of Criminal Minds . I admit it, I'm totally into fictitious serial killers. I am an avid fan from Hannibal Lector to Dexter. And each week on Criminal Minds , I enjoy the horrifically damaged psychopath who reeks havoc leaving bodies in his wake. Then the team (an amusing bouquet of FBI profilers) use psychology and socialogy and a whiz bang ex-computer hacker to nail the bastard. This show is not for the faint of heart. The killers sometimes use grisly techniques, and sometimes after the air date even I with my cast iron stomach can't eat beef carpaccio for days. This last week, the filthy slime bucket of a killer developed an anthrax-like pathogen, and rel
5 comments
Read more

- May 18, 2009
For the following, sweeping generalizations will be made. Perhaps even a stereotype of two. So enter, fair hearts, with care. This is not for the squeamish. I start with a definition. Let me flip open my American Heritage. Ah, yes, here we are. Culture. The totality of socially transmitted behavior patterns, arts, beliefs, institutions, and all other products of work and thought. Culture has been an ongoing conversation between Michael and me since we met. We certainly do not see brown eye to blue eye on everything, however, we respect each other's point of view, which sometimes means shutting the fuck up. For instance, my husband wouldn't let Sebastian's hair be cut until his second birthday. It's a black thing. It's part of his culture. Thing is our son looked like a sheepdog by the time I finally got him in a barber's chair. Sebastian is white. So, if I understand the definition, my black husband socially transmitted his African American beliefs on t
19 comments
Read more 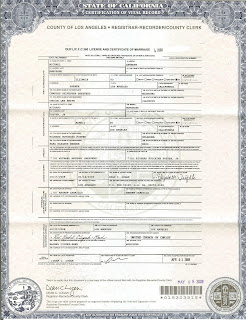 We got it! In the mail today. A piece of paper never felt more important. Engraved, signed, and dated with a seal. It doesn't define us. I refuse for it to define us. But how am I not to feel that much more validated by society? My head doesn't hang as low. My eyes don't dart as much. My knees don't buckle. I'll admit, we were scared it would never arrive in our mailbox. Our state is in such a state we were afraid to believe... Why is this taking so long? We have to be patient. We should have heard something by now. These things take time. I don't think we're getting it. Don't say that. It happened in October, it's now May. They're backed up, that's all it is. That's seven months ago. Bureaucratic red tape. The whole thing's a hoax, I'm telling you. No, it's not. That's it, let's move to Iowa! In a time when the definition of marriage is questioned daily, in a time when we in California are waiting on pins and need
25 comments
Read more

- May 12, 2009
Let's start with name calling. I want you to think of every filthy name in the book. Every racial epithet. Every sexist bon mot . Every international slur. Every gender bender. Every sexual orientation slam. Balls to the wall, I want you to create you own filthy, disgusting, slanderous mental list. Now read the following excerpt from an interview with Joe the Plumber in Christianity Today . Christianity Today : In the last month, same-sex marriage has become legal in Iowa and Vermont. What do you think about same-sex marriage at a state level? (Pretty much the same question that put Miss California on the national hot seat. Watch out Joe!) Joe the Plumber : At a state level, it's up to them. I don't want it to be a federal thing. I personally still think it's wrong. People don't understand the dictionary--it's called queer. Queer means strange and unusual. It's not like a slur, like you would call a white person a honky or something like that. You know,
31 comments
Read more 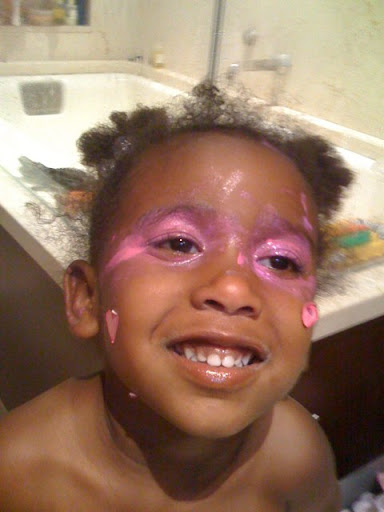 My daughter applied makeup on the potty when no one was looking. (I don't even want to consider the disease possibilities of that last sentence.). Evidently my ex drag queen husband has his work cut out for him. Subtlety, darling!
20 comments
Read more
More posts