Showing posts from March, 2010
Show all

- March 15, 2010
Mike Gatto is running in April's election for the State Assembly in California. Well, yesterday, one of his peeps called our house and my husband answered... CALLER: Would you consider voting for Mike Gatto? HUSBAND: Before I can answer that, I need to know where he stands on gay marriage. CALLER: (Pause.) Well, um, I'm pretty sure he's for it. HUSBAND: (Not totally convinced.) Where can I see that in writing? CALLER: (Searching frenetically.) Well... I'm sure it's here somewhere. Oh, yeah, here it is. Yes, he definitely is in favor of gay marriage. (Beat. Beat.) No, wait, that's abortion.
10 comments
Read more 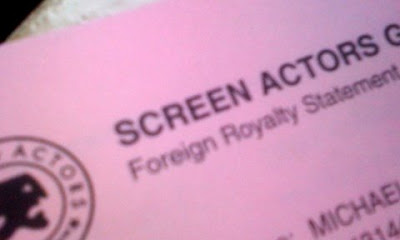 Residual checks always perk me up. They're sort of a mystical concept. You never know when they'll appear nor how how much they'll be. And I, at least, have no earthly clue what sort of algebraic gymnastics the Screen Actors Guild goes through to determine what ends up in our bank account. Today, when I found a residual check nestled amongst the bills, it was like Christmas in March. Then, once again, I had that nagging thought that I should be more diligent in understanding the byzantine world of residual pay, but to be honest, I got a turkey to cook (guests tonight), beds to make and dogs to de-worm. Who has the time? Luckily, it doesn't have to be a lot of money to make me happy. Just enough for a jumbo-sized bottle of Ketel One and I'm grinning like Carol Channing off her meds. Well today was a red letter day. Seventeen payments were added together in a single check. I can practically taste that martini. Foreign Royalty Statements are always a hoot becaus
20 comments
Read more 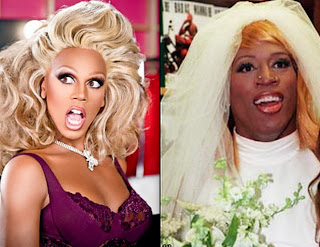 Homophobia moment number one deals with Black History Month in the Los Angeles Unified School District. At Wadsworth Elementary the students put on a parade carrying banners depicting prominent African Americans: Barack Obama, Rosa Parks, Martin Luther King, Jr., you get my drift. Along with these fine folk were also images of OJ Simpson, Dennis Rodman and RuPaul, which has caused quite a media kerfluffle, and in my opinion an unnecessary kerfluffle. Some parents were offended, then the school board got involved, and finally the NAACP got wind of it and the entire incident has been so blown out of proportion that it lead to the suspension and possible future firing of three teachers. Even our not-so-faultless mayor, Antonio Villaraigosa, chimed in, "These teachers undermine the school's well-intentioned celebration, and they did so at the expense of elementary school students. Their actions were not only cynical, but did a terrible disservice to the students, their families
22 comments
Read more 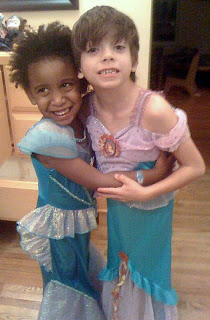 If you've been following Mommy With a Penis, you've heard about my daughter's closet of princess costumes, from tiaras to matching shoes. You've also heard that my son sometimes likes to dress in his sister's things. Well, to support both these themes I dug up this photo from last Halloween... Sometimes we just have to face the fact that mermaids are huge. When I was a kid, long before the Disney film, I'm a little ashamed to admit that my favorite story was The Little Mermaid . (Didn't everyone have a Hans Christian Anderson anthology?) Granted in that version she was blond and not a plucky redhead, and I don't remember her having a moniker of any sort. She was just a mermaid looking for love: long suffering, pretty and silent. And she had a brassiere made of seashells. What future gay boy wouldn't be enamored. Michael took Maxie to Target to find her Halloween costume and without qualm she chose Ariel. I was amazed at how quickly she made her ch
12 comments
Read more
More posts